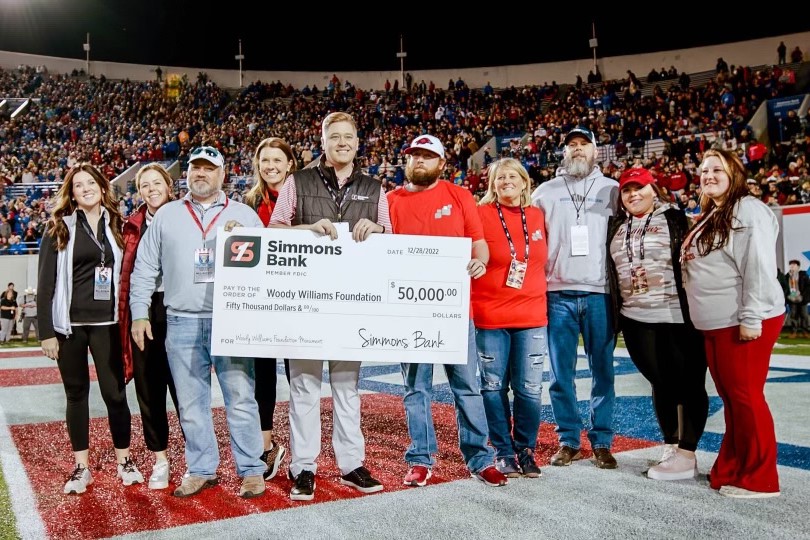 Arkansas and Kansas squared off; Simmons’ donated $50,000 to shine a light on Gold Star families.

In September, Simmons Bank received naming rights to Liberty Bowl Memorial Stadium. The renaming of the historic site included a new playing surface and other renovations inside the stadium. A few months later, the 64th annual AutoZone Liberty Bowl took place inside the stadium, introducing new connections to Simmons Bank. This year, Simmons Bank donated $50,000 to the Woody Williams Foundation, a charitable nonprofit organization dedicated to raising public awareness to honor, recognize and serve Gold Star Families members and their relatives whose loved one made the ultimate sacrifice in protecting our freedom. The Universities of Arkansas and Kansas accepted a bid to the bowl game, representing two states in the Simmons footprint.

The school’s acceptance into the bowl game pitted the two football teams against each other for the first time since 1906. Both Arkansas and Kansas experienced a stretch of success during the regular season before injuries set the teams back. However, the Liberty Bowl matchup serves as a mark of progression for both teams who are on the rise in their respective conferences. Head Coach Sam Pittman and the Arkansas Razorbacks finished the regular season with a record of 6-6 in the Southeastern Conference. The 2022 Liberty Bowl represents Pittman's third bowl invitation in as many seasons as Arkansas' head coach. Meanwhile, Lance Leipold and the Kansas Jayhawks submitted the same record in the BIG 12, earning a bowl berth for the first time since 2008.

On December 28, 2022, Arkansas and Kansas played inside Simmons Liberty Stadium for postseason football action. The Razorbacks wasted no time finding an offensive rhythm, scoring points on four of the first five possessions. As a result, Arkansas took a 31-13 lead into the halftime break. However, an offensive resurgence boosted the Jayhawks to a second-half comeback, forcing overtime after a touchdown during the final minute of regulation.

It required three overtime periods to crown a victor between the Razorbacks and Jayhawks. During the third overtime, Arkansas quarterback KJ Jefferson completed a 2-point conversion pass to running back Rashod Dubinion. Kansas did not convert its attempt on the next play, allowing the Hogs to outlast the Jayhawks 55-53.

Quarterbacks KJ Jefferson (Arkansas) and Jalon Daniels (Kansas) were the storylines leading up to the game, and their performances proved the experts correct. Daniels set Liberty Bowl records with his performance. The Jayhawk quarterback threw for 544 yards and accounted for five touchdowns. On the other side, Jefferson threw for 287 yards and added 130 rushing yards, earning him MVP honors. Altogether, the Razorbacks and Jayhawks accounted for the most points ever scored in a Liberty Bowl game, creating an instant classic as the first bowl game in the Simmons Bank Liberty Stadium era.

Read more about our partners and relationships: 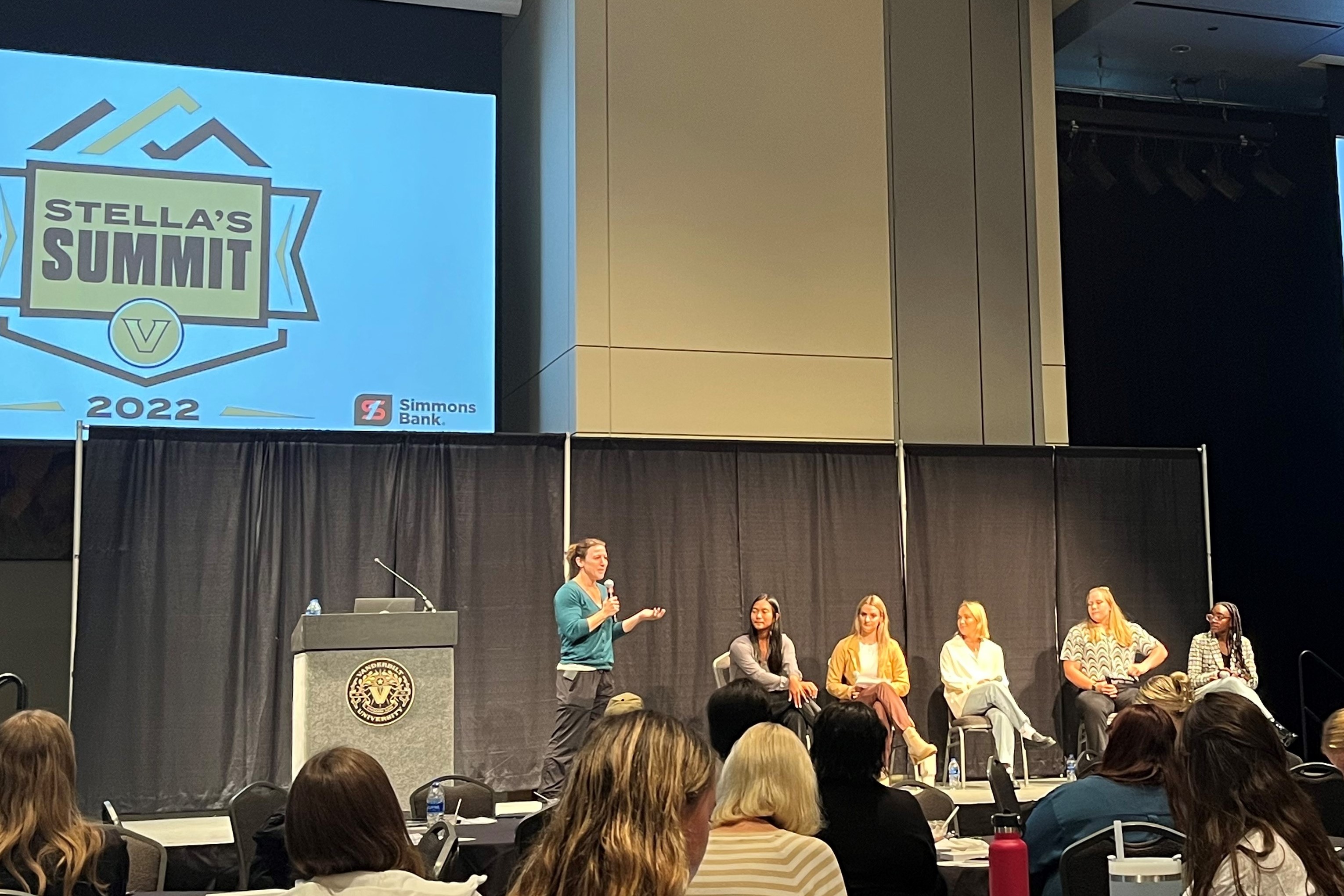 Stella Vaughn , the namesake of Stella’s Summit, was one of 10 women enrolled at Vanderbilt...
Read now 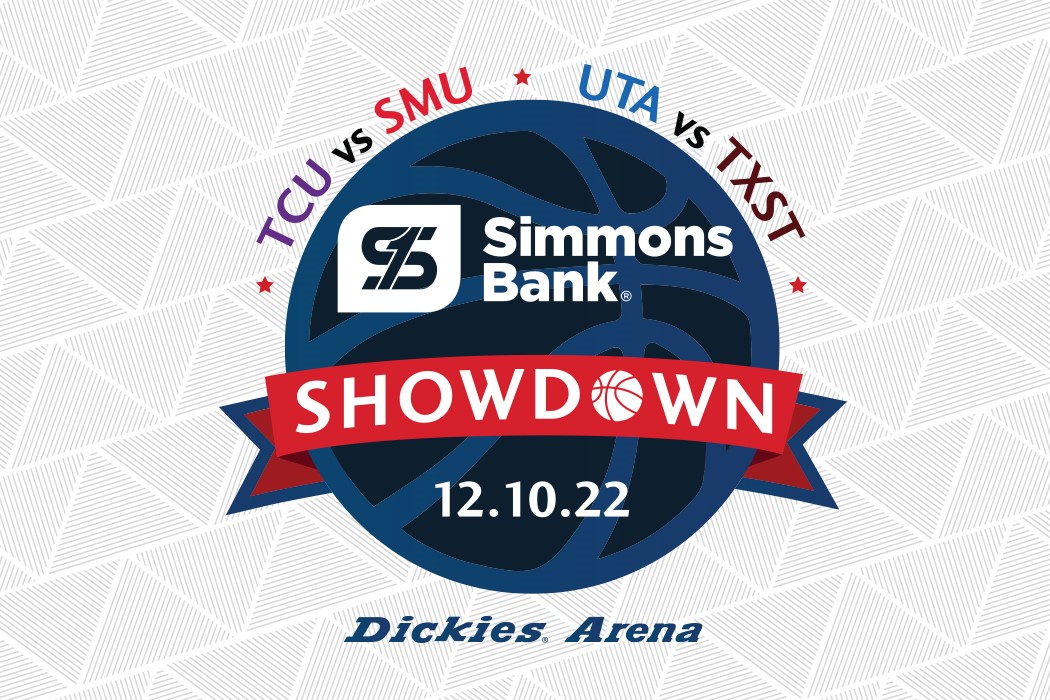 The night opened with Texas State University and the University of Texas at Arlington squaring of...
Read now

Because while a season is short, fierce is forever.

Sport builds us up. It strengthens our bodies and our resolve. Sport teaches us lessons: of grace, humility and the power of team. Winning the hour, the year or even our lives - we're winning our way. 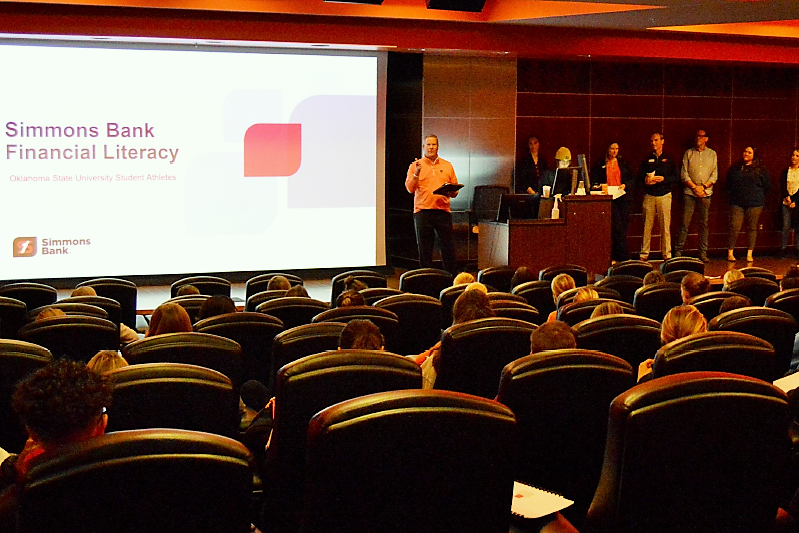 Simmons Bank is proud to support women’s athletics, and we know that winning our way isn’t always...
Read now

Arkansas and Kansas squared off; Simmons’ donated $50,000 to shine a light on Gold Star families. 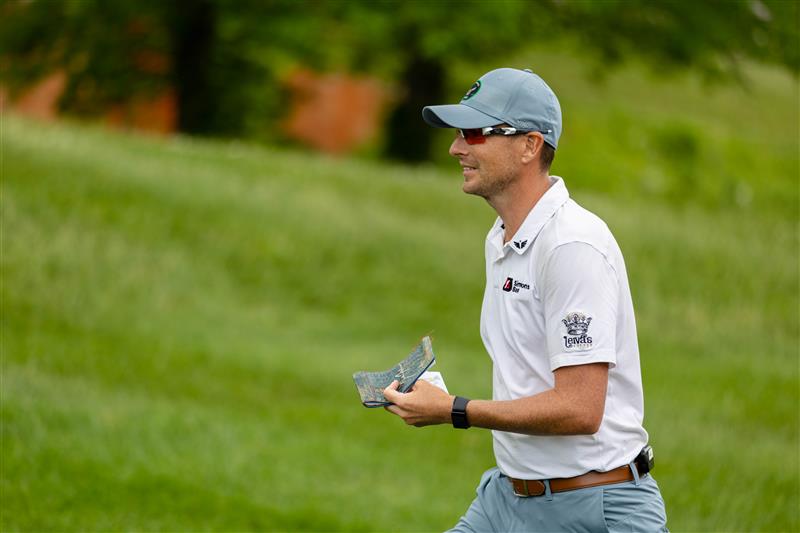 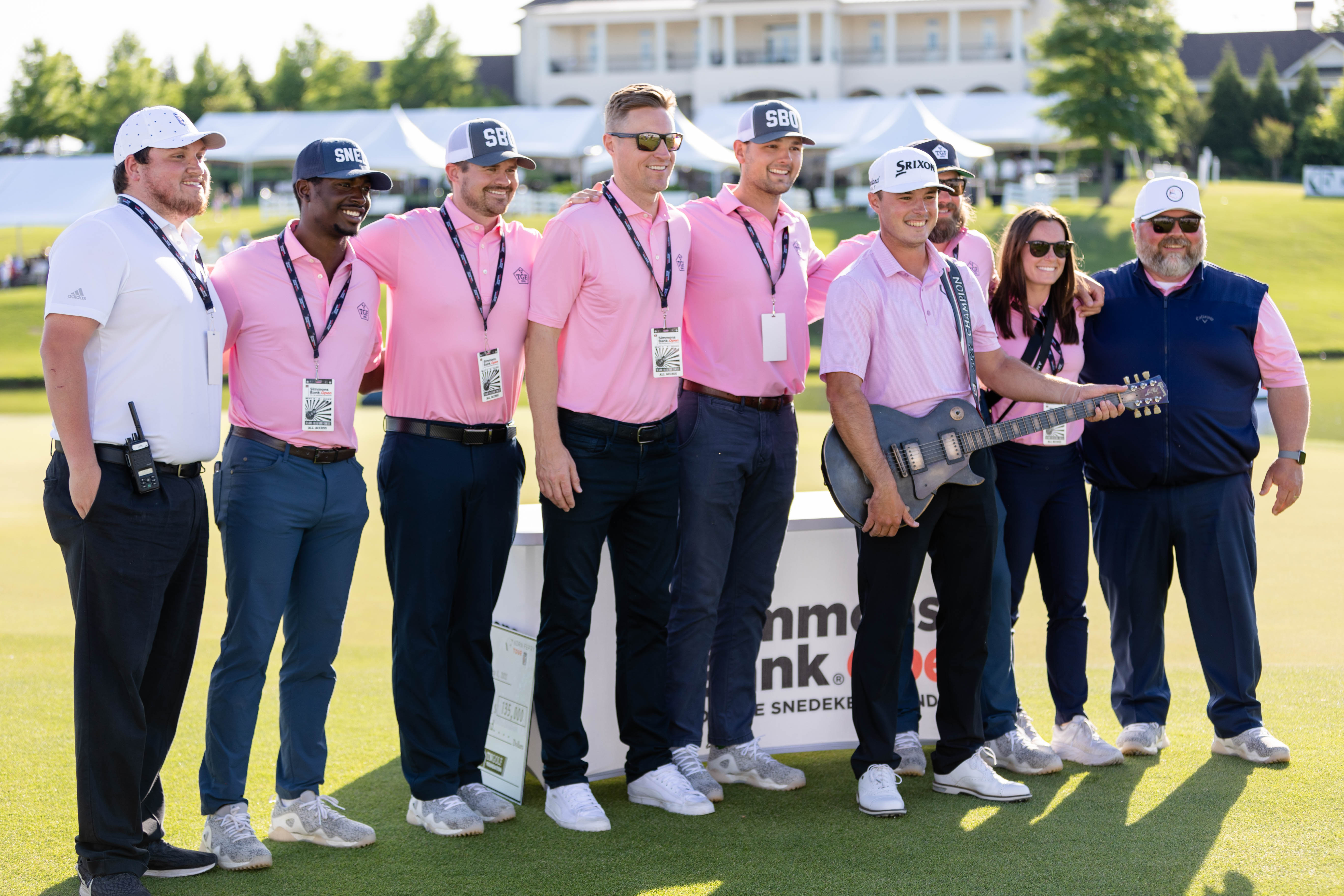 A major milestone after only 2 years

The Korn Ferry Tour announced the Simmons Bank Open for the Snedeker Foundation as its 2022 Tournament of the Year... 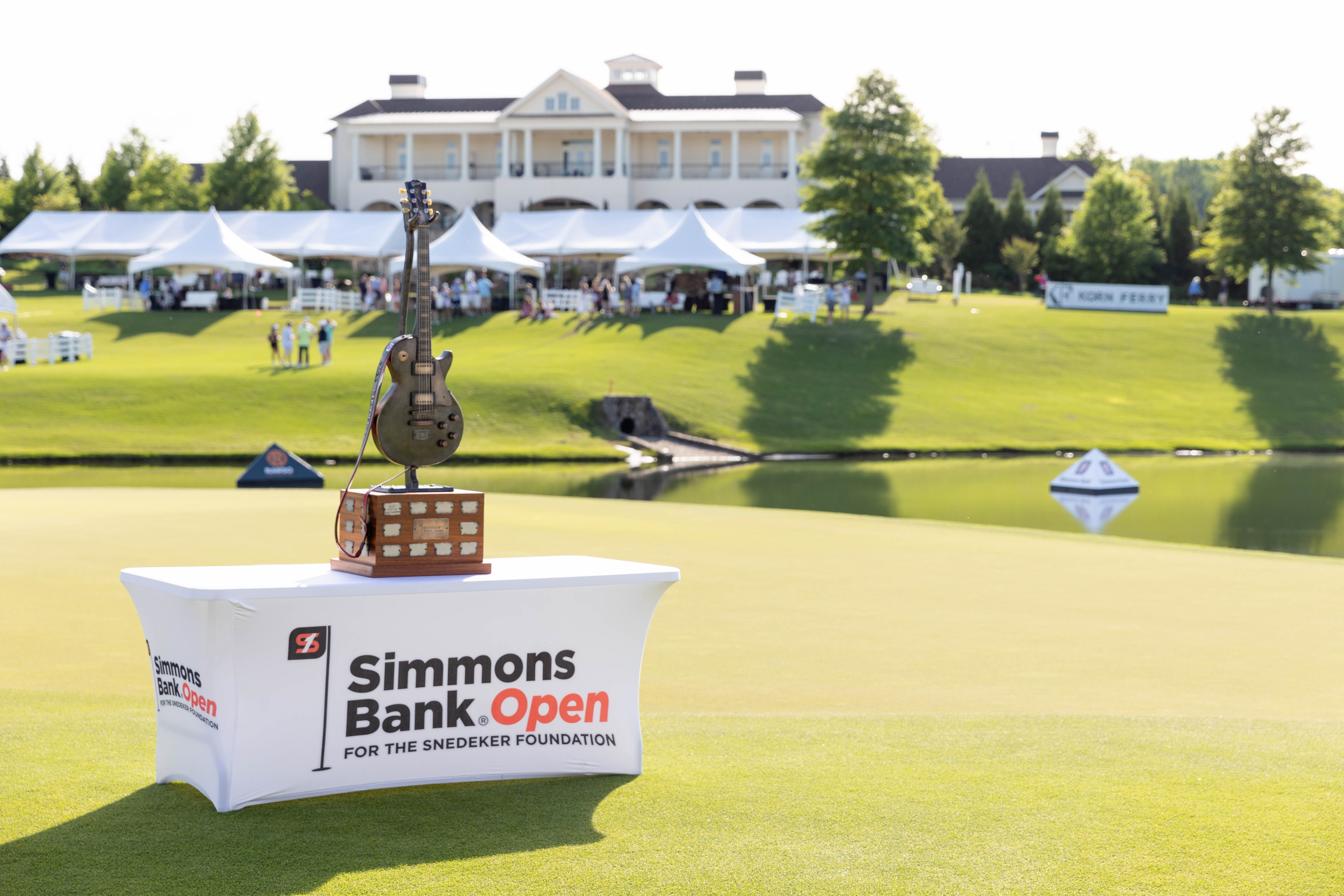 Preparations are well underway for the Korn Ferry Tour (KFT) Finals 2023 and a new addition has...
Read now

We’re always working on our approach

Simmons Bank has created a long-lasting commitment to opening doors through golf.

Corporate executives and golf have gone hand-in-hand for a century. But why?...

You are leaving the Simmons Bank web site. Simmons Bank does not provide, and is not responsible for, the web site’s content or performance. Simmons Bank suggests that you consult the Privacy Disclosure on the site for further information.